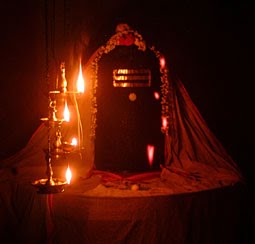 In the kingdom where the river kAvEri flows through beautifully was the town Emap pERUr. The town where the houses wear the mango leaves indicating good deeds, the fumes of vEdic rites that forms the clouds, the red lotuses in the pond that look like the flame in the rite with surrounding ghee offering, was heard echoing the knowledge of the vEdas. In the tradition of vEdic chanters who live in the unique shaivite discipline, came the ardent devotee of snake ornated Lord by name n^amin^an^dhi adikaL. He was like the fire that is grown with truth of the vEdas, firmly believed in the sacredness of Holy Ash, stood blissfully in holding up the feet of the Black-throated Lord who sings music.

He with a great eagerness to salute the Lord of thiruvArUr went there. He worshiped the only hold for the devotees the Lord who has the feathers decorated matted hair who has taken abode at the ant-hill. Very many days he spent saluting the the Supreme who smashed the three cities into heaps of ash. Then he went to serve the Lord at thearaneRi abode. With his heartful of love, mind full of mahEsha he prostrated many times the Lord and stood up in the interest of lighting the lamps thus serving the Kindling flame. By then the time was already evening, and he went to a nearby house to ask for some ghee for the lamps. The house he entered happened to be a house of a Jain. The people in the house mocked at him saying while the God Himself had the fire in His hand why unnecessarily he needed to put the light. No ghee was available if he wanted he could pour the water form the pond to light the lamps, they laughed in the ignorance of half shuttered realization. n^AyanAr felt bad, left to the temple and cried to the Lord.

There rose a voice ordering him to shed the sorrow and pour the pond water in the lamps and lit them. Praising the Lord who has the Sun, Moon and fire as the Three eyes, he brought the water from the pond and put it on the cotton plaited thread. With the world wondering, vengents whispering down, the White-Ash smeared Lord blessing, he lit the lamp that glowed till the dawn. He lit the complete sets of lamps the same way to illuminate the abode fantastically. While the absolute Source of energy is with, what other source could be hurdle ?! As he had the principle of worshiping the Lord shiva at his house everyday, he left the same night to his town and did the worship. The next morning he returned to the temple at thiruvArUr, did all the required services inside and outside the temple with the joy of working for the Greatest Master. In the evening he decorated in his way the abode of the Light with luminant lamps. This continued for many days. By then because of the great love and deed of dhandiyadigaL(1) Jains lost their faith and left the area. The shaivite discipline prospered. The king donated and organized many endowments for the service of the Lord.

The festival town of thiruvArUr geared up for celebrating the auspicious paN^guni uththiram(2). The Street Dancing Lord with the inseparable shakti on the victorious Bull came blessing all the way to thirumaNalai as part of the festivities. There the crowd that mingled with the chanting of the traditionless Lord's fame was without any caste and creed barriers. What barrier, caste, creed, age, sex, race, language or any form of life, could be there while thepashupati is there to salvage every creature. Along with them our n^AyanAr praised the God of nature. He returned home and was sleeping in the darkness of night on the outside corridor of the house. His wife came out and enquired why he did not do the Lord's worship by growing fire that night and skipped the food. When he was in the festival crowd everybody was present so the impurity followed him, he replied. He further asked his wife to bring water to bathe and then start the pUja. As she left, by the wish of God or by tiredness who knows, he slept immediately. The Lord came as if He comes to the pUja, and enlightened him that those who were born in the thiruvArUr belong to His squad. The devotee woke up shivering and with realization. He felt bad for not doing the night worship of the Ultimate Source. Did the worship, told the wife the happenings and rushed to thiruvArUr in the wake of dawn. As he entered thiruvArUr he saw everybody living there to have the form of the Stain-throated Gold like bodied God. He, fearful, fell down on the ground saluted them and rejoiced.

He saw the scene changed again with people back in their normal form. He begged for excuse from the Lord who showers the grace, who shines in everything. He lived doing a great splendid service to the God. He served the devotees of the Ash smeared Lord with many needful things with a rising fame and got praised in the thEvAram ofthirun^Avukkarachu n^AyanAr(3). His service to the Lord, to His truthful slaves continued as he was praised by the sage of service. With the world praising his service he entered the luminance of the shade of the Lord of thiruvArUR. Let the thirst to serve the hara in spite of the non-conducive circumstances stay in the mind.

The Lord of sacrifices sits and blesses in the sea surrounded splendid town thiruvoRRiyUr. The sea roars like the relentless devotee chanting praNavam. The tides trying to touch the feet of the Lord and the wind like a good friend taking those waterlets to the ultimate feet of the Lord in His abode, the betel nut trees moving their heads enjoying this - the land's beauty wore as crown the abode of the Lord of devotees. That land of the Lord of art was fertile for art and craft.

In that place of the Lord who enjoys the anointing by the devotees, was a street by name chakkarap pAdi street full of oil making professionals. Born there was the great devotee kaliya n^AyanAr as the boon of the austerities of those people. The great austerity of serving the Lord, who is meditated by the supreme vedas as the kindling divine light, without any self projecting in the divine work he used to illuminate the thiruvoRRiyUr abode of that three light sourcing eyed Lord who kindles thoughts of Truth in the devotees hearts. Like the way he had illuminated the temple of that Lord shiva in his heart with glorious characteristics, he lit the lamps in and out all around that temple in a splendid way. Like the bliss he had in his heart the lamps beamed the light everyday in the temple. The Lord who appeared as the pillar of flame to brahmA and vishNu resided in that temple enjoying the service that asked for nothing but delighted in beautifying the Lord's place.

Like the good and bad deeds and their effects his wealth also diminished on the earth. So what ? His pleasure and inclination in serving did not drop down even a bit! Unperturbed of his material status he kept his heart in the Glorious two feet of the Lord of greats which are the ideal wealth the devotees would yearn for. He worked for others of his profession, not bothering about the status, got the wages to continue without break his wonderful service. When even the rich refused to give him work and wages, not at all shaken in his determination to enjoy in Its service, the great devotee who was affluent once, worked in oil churning wheel and using the oil and oil-taken-seed he got for the work, he bought oil for the Lord and did his brilliant service, becoming a beacon beaming the sincere love for the Lord. With the number of people who do that job also grown he did not get enough work. Sold all his properties to persist in serving. With nothing else left in the extremity of devotion went to sell his beloved wife. Nobody was ready to buy.

The devotee who never allowed anything to interrupt his illuminating service was highly concerned about that days situation of not getting oil for worship. The Lord for Himself does not require any lighting or food, but the devotee with a love that is more than that of a mother who feed and take care of the child, feels for it when the service gets disturbed by external situations. This is this great selfless love that makes the Lord enjoy the offerings. The devotion that was pure made the n^AyanAr decide that come whatever be the lamps should be lit that day. He went inside the temple ofthiruvoRRiyUr with a decision. In place of oil he wanted to out his own blood ! He started cutting his throat. The Blue throated Lord seeing his extremeness in the determination to serve without break, caught his hands and stopped him. The Lord appeared with His consort on the Holy Bull in the horizon amidst the praise by the great people whose heart is nothing but He Himself. The devotee free from the wound flooded his eyes with tears of love. The Lord freed him from the bond of birth too and gave him the place in His abode - the place of brightness. Let the glorious service of kaliya n^Ayanar stay in the mind. 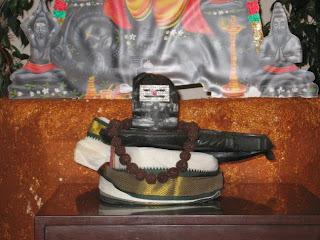 Lighting temples with vilakku (lamp) is an adorable need extolled by saints in our dharma - more so the Nayanmars. Please do your bid to fill in the oil to light a lamp at your nearby temple or join us to light the temples where immediate attention is needed. 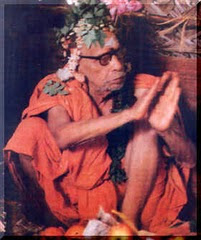